Today two more or less simultaneous images are etched into my mind.
The first is Mike Pence’s superb poise and diplomatic elegance following the retrograde behaviour of Arab Members of the Knesset as they disrupted the US Vice-President’s historic speech at the Knesset. The US Vice-President went on to commend Israel for its vibrant democracy, where heads of state come and go in accordance with election results.

US Vice-President was the very essence of diplomacy and poise during the Arab MKs’ outburst at the Knesset.

The second is the retrograde comments of EU tsarinna Mogherini as she engages in tongue-kissing with terrorist chieftain Abbas and assures him of the EU’s dedication to combating the US. Abbas is currently in the 13th year of his 4-year mandate, without the inconvenience of elections in the interim. This does not in any way bother the EU. 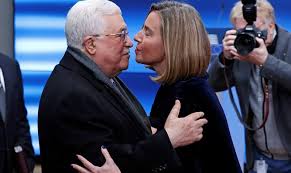 Mogherini appears to close her eyes in delighted schoolgirl anticipation as terrorist cheiftain Abbas grasps her to his bosom.