Skip to content
Swedish Foreign Minister Margot Wallström recently visited arch-terrorist Mahmud Abbas in Ramallah.
From the hands of Abbas she received a military honour given only to “Soldiers of Palestine”.
That medal is called the “Star of Jerusalem” and it is given only to “a soldier who has performed a distinguished act”. This is according to The Security Sector Legislation of the Palestinian National Authority, Article 110. Read it yourself, in the English charter produced by the PNA itself.
Making it pretty clear, in the words of the PA itself, in plain English, that the Palestinian Authority regards Margot Wallström as a “distinguished soldier of Palestine”.

Clutching her Palestinian military medal, Wallström left Ramallah on Saturday.
On Sunday Israeli security forces uncovered a massive illegal military arms factory in Hebron, just 42 kilometres away.
Sweden is the Ramallah regime’s largest per capita financier.
And Sweden declared on Friday, as Foreign Minister Wallström received her military medal from Abbas, that Sweden will redouble its efforts to support the Ramallah regime. 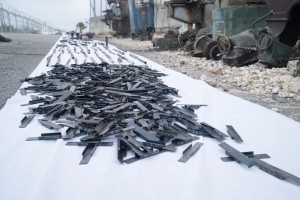 It is of course a declaration of war against Israel. A war that Wallström intends to fight through the UN, through the EU and mainly, at the cost of hard-working Swedes and retired Swedish pensioners, through the abuse of Swedish tax revenues – the hard-earned pensions and sickness benefits of Swedes that will now be siphoned off at an even greater rate to support the Ramallah regime. A regime headed by Abbas who is currently in the 12th year of his 4-year mandate. Not even this abuse of the most elementary tenets of democracy is sufficient för Wallström to reconsider her aggressive support of Abbas and her vicious determination to destabilise the parliamentary democracy that is Israel.
The question is whether there is any form of impeachment process in Swedish law for a minister of the realm who concurrently serves a foreign power. Wallström, not content with her open diplomatic confrontation with Israel, is now dragging Sweden into a situation with direct military implications.
Nobody in Israel will talk to her, not even the opposition. She has thus single-handedly united both the Israeli government and the opposition -no mean achievement. But it’s a pitifully small achievement that will fade into insignificance as the political and now even military ramifications of her abusive, anti-Semitic and aggressive meddling take on an increasingly international mantle.