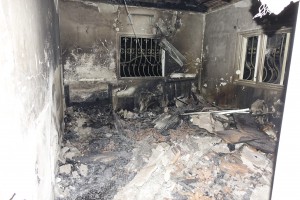 Here’s a first-hand account by one of the affected families in Neve Tsuf.
I give below the first-hand account of Rochelle Cohen, exactly as she wrote it.
Two things emerge from her harrowing yet inspiring text:
You have to be particularly stupid – or a Fatah leader – not to understand this simple fact. 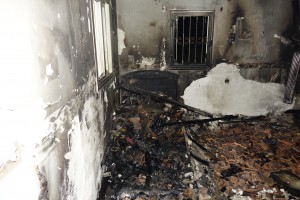 Here’s Rochelle’s first-hand verbatim account:
Nobody is going to believe me when I tell them that having to flee with our community in the middle of the night, close the door on our house, convinced I would never see the house again, and leaving behind our firefighting son, and friends, and then returning to what is only a very partial and unliveable house, has been a positive experience, but that is the case. Why? let me share with you a little.
I am Rochelle Cohen, though those of you who remember me will have known me as Rochelle Goldstein. I made Aliyah from Melbourne 27 years, ago, and while I never lived in Caulfield my parents, John and Judy Goldstein did move to Caulfield and loved being part of the community for about 20 years.
My family and I have lived in Neve Tsuf, a medium sized yeshuv, for the last 20 years, since the birth of our eldest child, Yael, My husband Doron (Darren originally from Sydney), and I chose to live in a yeshuv as that is where we felt we would be best able to contribute to the ongoing building up of the country. We are a community of over 260 families, of all age groups, which is somewhat unusual and we found very attractive. The founders of the yeshuv, who were the group hardest hit by the fire are in their 70’s and 80’s, and of course we have many young couples, many of whom are children and grandchildren of those already living there. Neve Tsuf is a beautiful place, surrounded by one of Israel’s few natural forests, on top of a hill that overlooks the coastal plains, and we are about 20 minutes from Modi’in, where my mother and brother’s family live.
But I have still not explained in any manner what happened the other night, or how on earth I could claim that it was a positive experience.
So, we ate Shabbat dinner at close friends. The husband of that family happens to be the head of the volunteer fire brigade, and my 18 year old son is a volunteer with them for a number of years, There was much lively discussion about the devastating fires all over the country, clearly arson, the handiwork of Arab terrorists that we deal with on a constant basis.
After dinner we went with our hosts to the Bar Mitzvah Oneg Shabbat, at our shule hall, of close mutual friends, which was lovely, and then we walked back to our home with one of the Bar Mitzvah guests, whom we were hosting. It was a really enjoyable evening, as when I came in the door we found all our children from the 20 year old to my youngest of 8 all busy in a very lively card game that may have involved shrieking and screaming, but a great deal of laughing too. Eventually we convinced them that we all needed to go to sleep and bade goodnight to our guest, climbing the stairs and preparing for bed. The girls, Shalhevet (15), Ateret-Adi (12) and little Efrat (8), all came in to say good night, and maybe squeeze in another half hour before they would be forced to go to bed, and then we declared our room off limits and sent them out.
I was just falling asleep when Ateret-Adi came back. “Imma” she said, “there is a lady down stairs who really wants to talk to you”. Confused to wandered downstairs and she said to me that there were flames to be seen coming from the bottom of the hill in the forest adjacent to our house.
That was it. I turned and shrieked, “fire, fire, everyone grab a jumper, shoes, and a coat, and let’s go”, and that’s what we did. 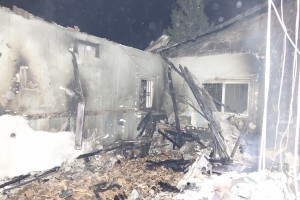 I woke our poor sleeping guest, threw a coat on her, it was freezing that night. We had, at Eitan’s insistence, packed a bag of just a few things, clean underwear and Tefillin. etc, that was by the front door, just in case, I handed the kids bags, checked the house. We knew the drill, disconnect the gas, kill the electricity, leave doors unlocked for the firemen, leave windows closed, count the kids, leave no one behind, and go. My fire fighter had left so fast I had not even said good bye, but that was alright, he did what needed to be done. He was a good boy, and donned his fire fighting boots, not wearing his favourite new hiking boots, so they would not be ruined.
And out into the night we went. By the time we left the house, maybe two minutes after the initial screeching of FIRE the flames were getting close and huge. The kids were a little ahead of us and asked again which way to go. I said go to the Rimels, where we had eaten the night before, they are in the centre of the yeshuv, it will be safer. We are coming. 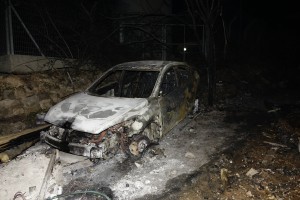 And so into the night my children herded each other along, comforting and holding. We began the same walk, but hamering on neighbour’s doors as we went. My husband went back twice to our immediate neighbour, in their wooden house, trying to convince them to leave, they thought they still had time. They refused him twice, but must have gotten out because I know they are safe and the only remains of their home today are the front steps. 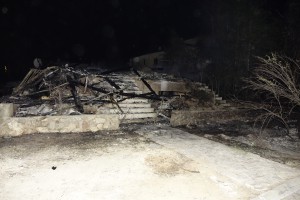 I caught up with my girls while Doron continued banging one doors. Collecting our friend and her family, where I had sent the children we realised that their well located house away from the forest was no safe haven as the flames were coming up the street, so our we all went into the night, a seriously religious Yeshuv, all running in pyjamas, but so what. At that point the alarms were sounded, people told to evacuate towards the exit of the yeshuv, in cars, so the cars started moving. Our cars were not n option as they were in the fire zone. My girls by this time found themselves carrying children and babies, not necessarily sure of whose children and babies they were.\And then we piled them in ones and twos into passing cars, seat belts be damned, arranging to me at the designated spot. When we met up the order came, via our phones, to move to the next yeshuv, Ateret, about 10 minutes away. There was debate. Those with family not far decided to go there and some found friends of our said there were going to his parents in Modi’in. Great, I said, here are Shalhevet and Ateret-Adi. Take them to my mother. I told them that while I had never sent them sitting of knees and unseatbelted in cars, I said this is the time when one danger our weighs the other. I kissed them and off into the night went my babies.
I grabbed my (not so) little baby, the 8 year old Efrat, Yael, the 20 year old, who was still carrying someone’s baby, and we began looking for another car with space only wanting to go as far as Ateret, how could I go further knowing that Eitan was here, fighting fires. We found parents for the baby, returned her, a car with space and the girls and I hopped in. Doron declaring he could hardly leave with Eitan here. 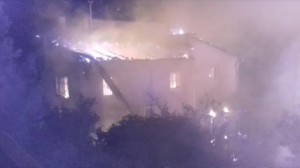