… why the International Olympic Committee (IOC) flatly refused to hold a minute’s silence as a mark of respect for the 11 Israeli Olympic athletes murdered by Palestinian terrorists in Munich, Germany, in 1972.
One single photograph says it all: IOC President Jacques Rogge wearing a keffiyeh with the text “Palestine” printed boldly across it.
The Palestinian Authority officially thanked Jacques Rogge for his staunch refusal to hold a minute’s silence in memory of the Jewish athletes murdered by Palestinian Arabs currently heading the Palestinian Authority – including PA President and Holocaust-denier Mahmoud Abbas. 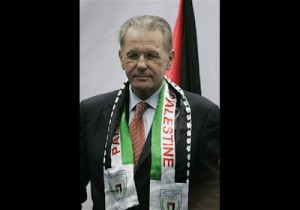