Not quite.
In fact, not at all.
Here’s what a true humanitarian convoy does: it delivers aid even while it is being bombarded with missiles by the very people for whom the aid is destined. Israel continues to deliver aid to the Gaza Palestinians who voted Hamas into power, even as Hamas incessantly bombs the aid convoys carrying the supplies from Israel to the Gaza Strip. Among the cargo carried by the Israeli aid convoys as they evade attack by Hamas is 553 tonnes of milk powder and baby food – and that is just in the first quarter of this year.
That’s a humanitarian convoy. As undertaken by Jews. Israeli Jews. For the benefit of Palestinian Arabs. Muslim and Christian Palestinian Arabs in the Gaza Strip – an Iranian territory whose government has sworn to destroy the Jewish state and push all its Jews into the sea. For an understanding of the way Israel regards all humanitarian aid, read here how Israel responded to the needs of the earthquake victims in Haiti.
By contrast, here’s what a Muslim “humanitarian” convoy on behalf of the Palestinian Arabs does: it carries such essentials as journalists, PR experts, propaganda puppet-masters and anti-Israel politicians, all of whom take up valuable cargo space on board and who apart from wasting valuable cargo space, also need to be constantly supplied with food, water, toilet facilities and more. Not much room left for “aid”.
But then aid never was the aim of the “Ship to Gaza” convoy.
In an outrageous disregard for the most basic human rights of vulnerable children, the pro-Hamas convoy across the Mediterranean has taken along infants as human shields as protection from any possible Israeli action. Israel has vowed to prevent the convoy from reaching Gaza without first vetting the cargo since its policy is to deny the import of armaments to the Iranian enclave.
Here’s the photographic evidence of the inhumane treatment of children by Hamas and their Turkish and other collaborators. 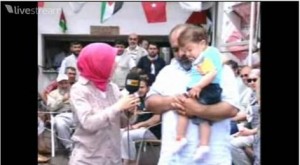 Turkish “aid” coordinator Bulent Yildirim was interviewed on board the Mavi Marmara, which is participating in the Gaza protest flotilla. During the interview, Yildirim was seen on the deck holding an infant and confirming that children have been brought along on the flotilla to prevent Israel from acting against the ship.
There is a huge difference, in fact an abyss, between the Jewish/Israeli norms of humanitarian behaviour, and the way pro-Hamas forces disregard even the most fundamental humanitarian considerations. Even when they are embarking on a supposedly “humanitarian” mission.
Thank heavens for such differences. Who in their right minds would want to even breathe the same air as these champions of human rights, who chant anti-Semitic slogans on board ship and who bring along infants as personal protection while smuggling weapons and other contraband to terrorists? It’s a continuation of the well-known Hamas tactic of using Palestinian Arab children human shields while firing on Israeli Jewish kindergartens.

Thank heavens for such fundamental differences.
But why on earth is Hussein Obama so silent on this issue over in Washington? I thought he wanted to profile himself as a champion of human rights?
I must have got that wrong then.