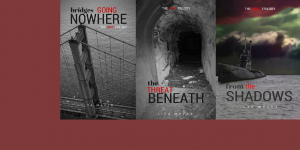 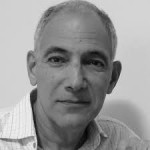 “The Hart Trilogy” – three action-packed political thrillers dealing with the tough security realities of Israel as an island of democracy in the Middle East, and Sweden as a growing hotbed of Islamism in an increasingly segregated part of the world.
Diplomatic and media wrangling between Israel and Sweden aside, there’s a lot more that unites the two countries than first meets the eye.

Not least, both countries’ increasingly desperate struggle for survival.
The three books – Bridges Going Nowhere, The Threat Beneath, and From The Shadows – are works of fiction.
But fiction grounded firmly in a harsh reality, fiction all too often overtaken by reality.
The way I have conceptualised the series, the three books actually form a single unit. They are a progression, a maturing, a journey that carries the reader from fairly innocent and naïve beginnings in the first book, to a conclusion in the third book that was already finalised in my mind some four years ago.
While writing, I half-expected a knock on my door from SÄPO, the excellent, hardworking and extremely praiseworthy Swedish Security Service.
A security service that unfortunately finds its hands tied by political masters who themselves are slaves to the religion of Political Correctness.
If they do indeed come knocking on my door, SÄPO will either want to arrest me because my writing is a tad too realistic for their tastes, seeing as it seems to spookily predict some of the most cold-blooded terrorist atrocities in the civilised world today.
Or they will want to hire me to write training scenarios so they can sharpen their operational preparedness for what is undoubtedly in the pipeline even as you read these words.
When you finish reading the third book in the trilogy, note its date of publication and then re-read the news from Europe and Sweden that emerged in the media a few weeks AFTER the book was published.
You’ll understand exactly what I mean.
I am currently busy writing my fourth book, “Picture Imperfect”. Where a worrying reality, a dark future, draws ever nearer.
I travel everywhere giving book presentations and doing book-signings, and have a series of four booked this summer in Israel. Inbox me if you would like me to come talk about the books, the reality they depict, and the creative process of writing the trilogy. I’ll be happy to come to your workplace, club, community group or other forum.