“The armed forces will pursue the (terrorists) with determination and patience until the terrorist organisation is neutralised.”
“It has been understood from information obtained that (the terrorists) suffered more than 100 losses.”
Terrorism is on the rise, “prompting the army to carry out at least two air raids and a small-scale ground incursion on rebel bases” beyond the country’s own borders, penetrating into the territory of a sovereign Muslim state.
Before reaching for your speed-dial to the UN Security Council and its Israel Delegitimisation Board, pause a moment.
It’s not Israel that has killed 100 Muslim freedom-fighters or terrorists, whatever your semantic choice of the day. It’s not the Jews who have invaded a sovereign Arab Muslim nation to pursue enemies, enemies with a grudge against their oppressors who in desperation have resorted to blowing up shops, markets, civilians, buses.
We’re talking about the Kurds, whose country (like Cyprus) has been occupied by Turkey for more years than most people can remember. And we’re talking about Turkey, whose Islamist regime has given its armed forces carte blanche to pursue the Kurdish freedom fighters “with determination and patience until the separatist terrorist organisation is neutralised,” according to Turkish general Fahri Kir. In fact, the general estimates that in the past few weeks Turkey has assassinated more than 130 Kurds in the country’s relentless determination to prevent the Kurds from achieving any form of autonomy. Turkey refers to the Kurdish PKK political party as a “terrorist organisation”.
Stop a minute and reflect: Turkey eulogises the killing of scores of what it calls “terrorists” – but denies Israel the right to do the very same thing. And the world loudly supports Turkey (on Israel) but is utterly silent (on the plight of the Kurds).
9 Turkish Islamists were killed when they attacked Israeli soldiers on board the Mavi Marmara. http://www.ynetnews.com/articles/0,7340,L-3907170,00.html The UN Security Council convened within 12 hours to debate the issue and roundly condemned Israel for its determination to prevent military supplies from reaching Hamas in the Gaza Strip. The Turks and their collaborators had embarked on a voyage to bring assistance to Hamas, an organisation that Israel, the US, the EU and the UN all classify as a terrorist organisation.
At the same time – or more accurately before, during and after this incident – Turkey was busy killing Kurds who want their country turned over to them. Turkey has classified the Kurdish freedomj fighters as terrorists. At no time have Turkey’s actions against the Kurds been brought before the UN Security Council. The issue will never be taken to the Council for debate.
The two cases are virtually mirror images of one another – with one vital exception: In the first case it is the world’s sole Jewish nation that is attempting to defend itself and is being roundly condemned for doing so. Israel killed 9 terrorists who were bent on murdering Israeli soldiers. In the second case, it is one of the world’s 52 Muslim states that is not defending itself but instead carrying on an offensive war – including prosecuting that war in neighbouring Iraq.
And therein lies the distinction, the difference in the world community’s response. It is always ready to criticise Israel for every action the Jewish state takes. And is never under any circumstances prepared to criticise any action any Muslim state takes, no matter how horrendous that action.
Of course, the Muslim states are in the majority in the UN, which explains a lot. By no means are all Muslims – whether individuals or nations – Islamist, but under no circumstances will Muslim organisations, institutions or nations criticise one another, whatever the circumstances. Religious allegiance before everything – including ethics, morals and principles.
It’s as close to systematic racism as one can get without using the word. Because if you use the word, you’ll immediately be labelled “Islamophobic” – which according to the charter that the world’s Muslim states are trying to force through the UN encompasses anyone criticising any aspect of anything in any Muslim state, organisation or institution.
Meanwhile, the Palestinian Authority (PA) applauds the Islamic world’s stance against Israel and encourages Islamist regimes such as those in Ankara, Teheran and Riyadh to continue supporting the PA’s fight for its “democratic rights”. As part of its determination to deliver these “democratic rights”, the PA has – once again – cancelled elections. It’s an insult to the most fundamental demands for transparent governance and democratic procedure, but it is being perpetrated by a Muslim entity – which is why this issue has never been brought before the UN Security Council and never will.
The Lebanon, meanwhile, home to Iran’s Islamist Hizbollah army, continues to deny Palestinian Arabs citizenship, property ownership rights and the right to engage in certain professions. It’s a throwback to medieval, primitive attitudes that is shocking to every civilised sensibility in the world, but it is being perpetrated by a Muslim entity – which is why this issue has never been brought before the UN Security Council and never will.
For a perceptive insight into how Jews have traditionally been treated in the Arab world – and this writer is of Iraqi Jewish descent – read the following article about Professor Shmuel Moreh in the Jerusalem Post.
For a look at the society that is being engendered among Israel’s immediate neighbours – the Palestinian Arab children of Gaza under Hamas rule – take a look at the following images. No comment needed. 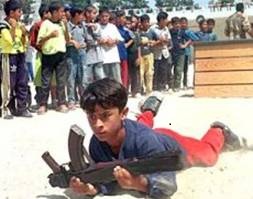 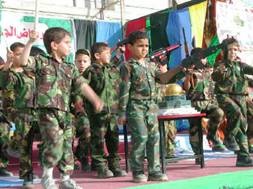 And now for a lighter look into the darkest recesses of cruelty where civilisation is an unknown term and where elections are run along the lines of “Vote for me and you get to keep your right hand” – the Islamist regime of Iran. The long-suffering Iranian people really do need a break from Ahmadinejad and his jihad-sponsoring activities in the Lebanon, Gaza, Iraq, Venezuela, Argentina, Turkey – you name it.
The following clip is from “No laughing matter” and takes an irreverent look at what makes Iran’s current Islamist regime tick. That ticking is growing ever louder as the jihadi regime gets ever closer to securing its very own nuclear bomb.